HydroFLOW West Inc. - HydroFLOW Master Distributor in the US Pacific. 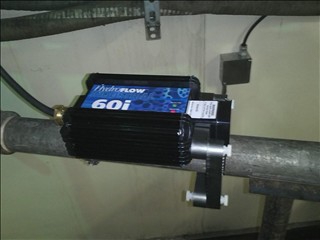 Well water with a hardness of approximately 200PPM of calcium carbonate. Note: The water softener reduces the hardness to around 80PPM.

Due to excessive lime scale accumulation, the diesel steam boilers were on the verge of being decommissioned for a week in order to be acid cleaned; a process which typically costs over $15,000. In addition, there was a strong possibility the steam boilers required replacement ($350K each). The head of maintenance decided to evaluate HydroFLOW’s ability to clean the steam boilers and possibly avoid acid cleaning.

Remove scale deposits from the steam boilers, DA tank and pipes without the need to acid clean and lose a week’s worth of production time.