Choosing the right eco-friendly water treatment option. What’s out there?

Choosing the right eco-friendly water treatment option. What’s out there?

Living in a hard water area can be a big pain for many homeowners. Not only does hard water cause aesthetic issues such as hard scale buildup on home fixtures, it also forces homeowners to spend money on servicing and/or replacing their appliances. For example, replacing a heating element in household appliance, such as a water heater, can cost hundreds of dollars.

These hard water hassles cause many home and/or business owners to look for solutions to protect their properties and their wallet. There are many alternative water treatment options in the market for the average consumer to choose from. With all of these options, how does one know which solution will be the right choice?

Let’s explore the varying types of water treatments, and the unique ways in which they function to clear your pipes and your worries, allowing you to focus on more important things than scrubbing your sink and calling the nearest plumber.

What is an eco-friendly (chemical-free) physical water conditioner?

Chemical-free physical water conditioners are devices intended to prevent the build-up of hard limescale in a physical (i.e. non-chemical) manner. This is done by influencing the ions in the water so that when the saturation point of the water is altered (e.g. by heating) the calcium carbonate (or other minerals) precipitates as small crystals in suspension in the water, rather than as a solid mass bonded to surfaces.

Intrusive magnets were the first physical water conditioners that appeared after the discovery that water flowing over magnetic rock did not cause hard scale to accumulate on the rock's surface. 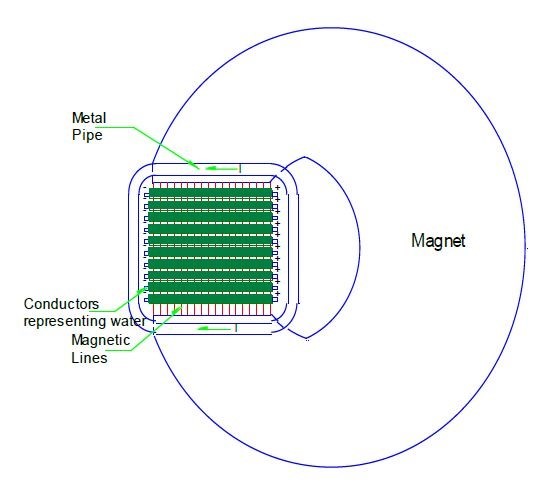 Figure 1: illustrates the general principles that are employed in the operation of intrusive magnets. The conductors represent the water that is moving and cutting the magnetic lines, thus generating a voltage represented by the (+) and (-) on the ends of the conductors. The voltage that can be generated by utilizing such an arrangement depends on the strength of the magnet and the speed of flow of the water.

Current is generated as a result of the voltage. The current will be dependent on the voltage and the conductivity of the water. The current that is produced by this method is DC (Direct Current). It will act as a galvanic current causing corrosion and will release metal ions into the water.

Any clusters that are formed due to the electrical field near the magnets will be carried by the water flow towards the source of heat. Some clusters will grow by attracting more ions and some will dissolve back. These clusters are not stable and will break up to individual ions after a relatively short time (2-3 min). If enough clusters can reach the source of heat they will grow to form a nuclei and the crystallization will occur as described above.

This dependence on the rate of flow and conductivity of the water can cause unreliable results when utilizing this conditioning method. In addition, a permanent magnet will attract magnetic particles flowing in the water, causing reduced efficiency and increasing the possibility of complete obstruction of the pipe. No enhanced nucleation can occur beyond the magnet itself, as the effect is localized to the magnet.

When used on plastic pipes, magnets have no effect because the electric field cannot be formed without the metal path for the current to flow. In industrial circulating systems a small degree of success can be achieved.

These are constructed mainly of ceramic magnets that are plastic coated. Two individual magnets are clamped on the pipe to create the magnetic lines. These are attenuated by the large air gap between the magnets. There is no way to control the speed of flow of the water and there is no reliable scientific evidence to prove that benefits claimed are being produced.

It is debatable if such an arrangement can generate an electric field capable of forming clusters. Manufacturers producing such devices claim that results can be achieved with any pipe material, however without scientific evidence, there is no way to verify if that is a legitimate statement.

With correct design it is possible to generate strong magnetic fields with electromagnets. Electromagnets are much like clamp-on magnets, only considerably stronger. It is also possible to control the speed of flow by restricting the flow. These devices suffer the same disadvantages as the permanent intrusive magnets described above. An additional disadvantage is that they must be connected to an electrical source, resulting in installation and running costs. The only advantage of electromagnets over permanent magnets is the ability to be switched off, thereby releasing any magnetic particles that may have accumulated in the pipe.

These are categorized by wires that are wrapped around water pipes in an attempt to generate a magnetic field. The 60 Hz coils are carrying the voltage to a single wire coiled around the pipe. 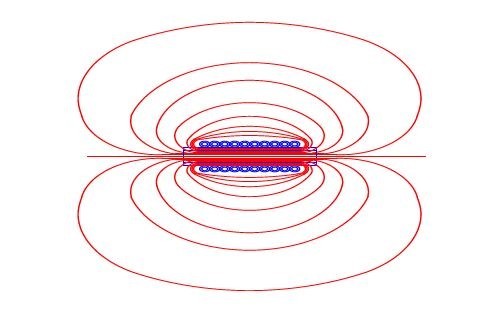 There are other reasons for variation in the electric field that may be formed by this method. The main one is the turbulence of the water flow within the pipe. The water flow within a pipe may not flow linearly. This depends on many factors and will be completely different between one installation and another. The turbulent flow within the axial magnetic lines will cause uneven voltages within the electromagnet. These variable conditions can explain the reason that in some cases these devices have some success and in others they fail completely.

Electrolytic physical water conditioners are basically a battery. These water conditioners operate on the well-known principle that if metal electrodes, made from different materials e.g. zinc and copper, are immersed in an electrolyte; between them, Zinc ions are then released into the electrolyte (water) by the anode. The release of positive zinc ions into the water will release electrons that will flow to the copper cathode through the connecting wire. This process will continue until the zinc anode is completely dissolved.

The electrodes are connected by a large resistor 1MΩ (1, 000, 000 Ohms). This is done to increase the life of the zinc anode but will drastically reduce the electrical field applied to the water. The manufacturer is faced with the problems of increased conditioning effect at the expense of the life of the conditioner. A balance must be achieved. A reasonable life span is only obtained with the conditioning effect reduced.

It is generally accepted that these conditioners are producing an effect. And, as there is solely an electrical field being generated (no magnetic field) to obtain scale inhibiting, this is additional proof that the electrical field is responsible for the conditioning effect as described above. There are numerous disadvantages with such conditioners:

There are numerous manufacturers of the wire coil electromagnet physical water conditioners. All are based on two basic designs:

Note: Dutch and Belgian inventors have patented both designs respectively, however, many copies of these designs have been in production for the past 20 years without any apparent difficulty.

In general, they produce the same swept frequency square wave signal of 1 KHz to 6 KHz. Various designs have appeared in the amateur electronic press. For example, in Elektor Electronics international electronic magazine issue July/August 1994, an article headed “Water Softener”, describes in detail the construction of such circuitry with single, double and triple coil systems. In a single coil system, the inductance of the coil is very low. The information below, illustrates how you would test for signal strength in this type of system.

The HydroFLOW conditioner, which is powered by Hydropath technology, is a sophisticated signal generator that produces a complex waveform. This waveform is fed to a ferrite core. In the residential range, the core is divided into two sections that are pressed together by a leaf spring. In the commercial and industrial units, the core is constructed in segments. It is within this core that the oscillating coaxial magnetic field (O.C.M.F) is generated. The O.C.M.F. induces a voltage in the pipe, and the water in the pipe. These two voltages are the same. Since there is no voltage difference between the liquid and the metal, no current can flow between them. This will eliminate any corrosion that would have otherwise formed. The frequency of oscillation is +/- 150 KHz.

HydroFLOW has an advantage over other eco-friendly physical water conditioners because the patented Hydropath signal travels throughout the entire piping system, without the need for flowing water. All other generic types of water conditioners act on the water only at the installation point and are flow dependent. It is necessary for the water to flow within the unit to transfer energy to the water. The flow must be slow enough to transfer the energy to the water. If it is too fast, not enough energy will be transferred to create the effect. If the flow is too slow it will take too long to reach the area where the minerals are precipitating, and the effect will decay in about 2-3 min. This is the reason that manufacturers specify flow rates, and maximum flow necessary for proper operation of such devices. Such flow rates are unlikely to be achieved in practical applications.

To prevent scaling, energy has to be transferred to the water to change the crystallization from the piping and equipment surfaces to suspension in the water. This is what happens with all the physical water conditioners on the market.

Hydropath technology works differently by applying the energy efficiently throughout the plumbing system. The propagating electrical field creates clusters of ions everywhere and recreates the clusters that have been dissolved back into solution by the water.

As an added note: There are other methods of water treatment that are not physical water conditioners but are necessary to list because they are an often-used methods.