What is Fouling and How Does it Affect Heat Transfer Efficiency?

What is Fouling and How Does it Affect Heat Transfer Efficiency?

Scale and biofilm are referred to in the industry as a form of fouling. These however are not the only form of fouling that can occur. Fouling is simply defined as a process by which a surface becomes less efficient due to the accumulation of deposits on it. (4)

Water is used in a wide range of commercial applications. Every day, businesses and facilities heat water to serve the needs of their customers and patrons. Each year, a significant portion of their overhead is allotted to the fuel required to heat water, and every day that allotment becomes slightly higher because of build-up in the system. However, many do not realize what they lose each year due to the fouling occurring inside their systems.

Water is often called the “universal solvent” because it dissolves most substances with which it comes in contact. This is why water contains dissolved minerals, such as calcium carbonate (lime), magnesium, silica, iron and phosphate. The amount of these dissolved minerals in water varies throughout the country and from municipality to municipality. However, 85% of this country’s area is served with hard water containing concentrations of dissolved minerals sufficient to form scale. When water is heated, it undergoes a chemical reaction that causes the dissolved minerals to “precipitate” out as solids. The amount of precipitant, or scale, is directly proportional to the volume of water used and its temperature. Scale allowed to build up will inevitably cause efficiency losses, malfunctions, and total equipment failure. It is responsible for tens of millions of wasted dollars each year in maintenance costs and energy consumption. (3)

Scale has a very low thermal conductivity. In fact, it acts as a better insulator than a conductor for heat transfer. The thermal conductivity of a typical lime/scale deposit measured in Btu/hr/ft2 /in/oF ranges from three to seven. As a comparison, the thermal conductivity of copper is 2680 and steel is 460. It is easy to see that a heat transfer surface that has accumulated a scale build-up will have a less efficient heat transfer process. This means that the metal surface must be hotter for the same amount of heat to be passed through both the metal surface and scale accumulation then into the water. If enough scale is present, the metal overheats, causing distortion, embrittlement, and eventual failure of the water heater. In fact, as little as one-fourth of an inch of limescale on the heat exchanger can increase utility costs by as much as 50% and cause equipment failure in as little as two years.(5)

It’s easy to see why it’s so important to keep scale formation under control in a cooling system. If you’re spending $10,000 a month on energy for heat transfer and allow 1/8 of an inch of scale to build-up you will be spending $12,480.00 just to maintain the system at its current level.

Scale is not the only form of fouling that can impede heat transfer. Biofouling is a phenomenon that occurs in environments where the concentration of bacteria is high and where there are available surfaces for them to grow. This is well-known in the marine industry; for centuries boat hulls have been victims of bacterial growth and it has been solved in different ways; for the past century mostly by the usage of paints containing biocides. As many of these biocides are highly ecotoxic, the usage of some has been banned internationally. The most known example is probably Tributylin (TBT), which was banned in 2003 due to its biotoxicity, bioaccumulation, and widespread effects on organisms in the aquatic environment.

Boat hulls are not the only victim of biofouling. Biofouling is a problem in other industries and applications, such as cooling towers and heat exchangers. For cooling towers, this is often solved by adding biocides and other environmentally dangerous chemicals to the system, whereas for heat exchanger maintenance is normally done by mechanical cleaning. Both of these methods are expensive and potentially problematic for the environment.

Biofouling is a general term referring to undesirable effects due to the attachment of micro-organisms at liquid-solid interfaces of heat exchangers and condensers. The microorganisms produce a slime layer which is a terrific heat insulator. Biofouling on the inside surface of heat exchanger tubes limits the heat exchanger's performance drastically and causes pronounced increase in heat transfer resistance. The resulting energy losses in condensers and heat exchangers are of major concern in all industries. Biofouling is not limited to microbial activity, it can enhance some of the more commonly known fouling phenomena, such as precipitation or crystallization (scaling) and corrosion. (3)

Biofouling is particularly a serious problem in industrial cooling water systems. Nearly an 80% decrease has been observed in the performance of a cooling system over a 7-week period, due to biofouling. The simplified calculations below show that a very tiny layer of biofilm, which is not visible to the naked eye, can reduce the heat transfer rate significantly due to increased resistance against heat transfer. For instance, a 5-micron layer of biofilm can cause about 67.6% reductions in heat transfer of copper tubes, and 18.5% in Steel tubes. Even 1 micron of biofilm can reduce the heat transfer of copper tubes by nearly 30%. Below you will find a table that shows the percent reduction in heat transfer in relation to biofilm thickness. (2)

Based on the table above you can see the serious impact even a small layer of biofilm in a system can cause. Imagine if the system has both scale and biofilm built up inside of it. The amount of wasted energy will have a significant cost involved. This makes controlling scale and biofilm in any heat transfer application a top priority.

Facility managers are certainly in tune with the energy costs that a building accrues. Energy costs are often one of the most significant operations and maintenance budget items that a facility manager is concerned about. Therefore, they will monitor what's known as the “fouling factor”.  Basically, this is used to calculate how much efficiency has been lost as a result of fouling. For example, if an HVAC system's efficiency was reduced from 100% to 95%, then it is assumed this is because of buildup in the system. This would make the fouling factor equal to 0.05. What makes the fouling factor important to a facility manager is because when the fouling factor reaches a particular threshold (There is no set industry threshold, every facility determines what threshold is important to their circumstances) it tells them it’s time to take some kind of action whether it be chemical or shutting things down for mechanical cleaning.

How can HydroFLOW help reduce scale and biofouling?

HydroFLOW water conditioners are highly efficient, non-intrusive electronic descalers that are installed on the water line feeding your boiler or heat exchanger. In a recirculating system such as a cooling tower/chiller loop the unit will be installed after the pumps, before the chillers. Powered by Hydropath technology, HydroFLOW treats fluids by inducing a robust yet harmless signal of 150kHz throughout plumbing systems made of any material, including PEX and PVC.

To prevent scale the Hydropath signal causes mineral ions to form suspended clusters that turn into stable crystals in solution when temperature or pressure changes occur. The suspended crystals will prevent scale from building up in pipes and on heating elements, thus increasing heat transfer efficiency. Since the crystals are in suspension, rather than attached to your boiler tubes or heating elements as hard scale, they will flow through the system freely. In a typical boiler application these crystals will begin to settle out in the boiler and be removed through standard blow-down procedures. In a typical cooling tower application, the crystals will settle out in the sump or be removed by side-stream filtration. https://www.hydroflow-usa.com/Scale 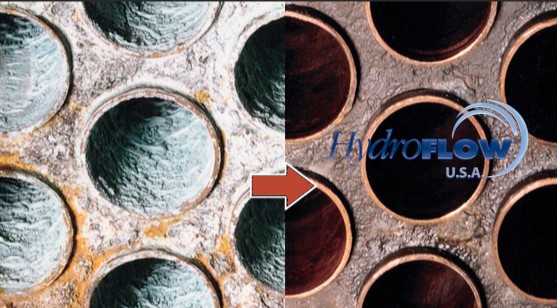 As the Hydropath signal propagates throughout the piping system it will cause the release of biofilm by agitating the colonies formed on heat exchanger surfaces. The presence of the 150kHz signal will not only cause the biofilm to release but also prevent new colonies from forming. The Released biofilm is flushed or filtered out of the system. In a recirculating system, free bacterium passing through the HydroFLOW’s ring of ferrites will also be deactivated or damaged. Using a cooling tower/chiller loop as an example, HydroFLOW can lead to a 75% reduction in biocide use while maintaining industry-standard bacteria levels with no biofouling/biofilm accumulation. Since HydroFLOW also reduces scale buildup, cooling towers can often be run at higher conductivities leading to blowdown water savings of up to 50%. https://www.hydroflow-usa.com/Bio