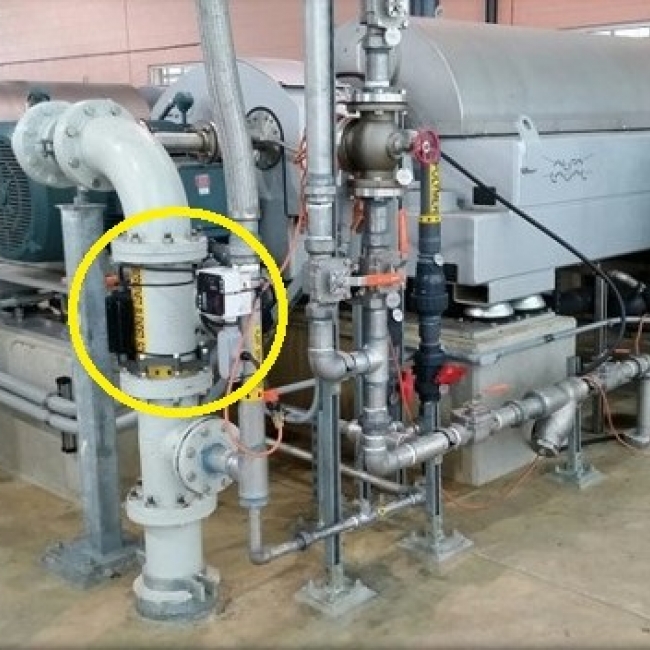 When installed in accordance with the manufacturer’s recommendations, the HydroFLOW physical water conditioning devices, which are powered by Hydropath technology, prevent struvite from accumulating as hard scale and can assist in the removal of existing struvite deposits. It is important to note that constant liquid flow is required in order to remove hard scale deposits from a system.

How does the technology work?

The HydroFLOW devices induce a unique frequency (i.e. the Hydropath signal) into the liquid medium which causes the component ions that make up struvite (magnesium, ammonium and phosphate) to come together as loosely held together clusters; the presence of the Hydropath signal is believed to induce the formation of these clusters. When certain conditions are created (i.e. pressure change, temperature change, turbulence, etc.) the clusters precipitate out of solution and form stable crystals of struvite that remain in suspension. These TSS particles are believed to be roughly 5-10 microns in size. The stable crystals are not able to adhere to surfaces as hard scale and are carried away with the flow, or can be filtered out of a system. In some cases, a small quantity of material is left behind and forms a soft and thin layer of substance that has negligible impact on liquid flow inside pipes and equipment.

Once formed, can the crystals revert to dissolved ions?

It is very unlikely for crystals to dissolve back into ions and cause complications downstream. This is because in order to turn back into magnesium, ammonium and phosphate ions, the crystals need to be subjected to conditions that will induce them to dissolve and dissociate into ions. Almost all wastewater systems do not allow such conditions to occur downstream of areas where struvite begins to form.

Where should the devices be installed and how many are required?

Struvite formation from the magnesium, ammonium and phosphate ions does not accumulate uniformly throughout a piping system, but rather at different points according to a variety of factors. This means some ions remain in solution and may precipitate down the line. The HydroFLOW device will assist in the creation of crystals that typically do not decompose when the signal is not present.

The electric Hydropath signal dissipates as it travels down a pipe or inside equipment. It is recommended to place the HydroFLOW devices a few feet prior to a pipe section or equipment that is susceptible to struvite accumulation. In some cases, multiple devices are required in order to ensure full coverage of a system.

For the full PPT please click on the PDF.